“It is the energy of punk sex and sexuality, at once crude, brutal, playful, expressive, and political – that Showboat captures through its candid lens,” writes Mott, who has curated the survey using original material from his own punk archive, The Mott Collection. Echoing the design of a glossy magazine – itself a nod to pornographic titles from the 1970s – the work aims to explore punk’s enduring influence on sex and sexuality, from independent zines and record covers to film posters and event flyers. We learn that from its inception sex was an integral part of the movement, traceable to Shakespeare’s use of the term “taffety punk,” to mean “a well-dressed whore.” From the subtlety of Janus magazine’s tagline – “A Journal for the Modern Discerning Adult” – to the more overt American Journal of Dick-Licking, the spreads are transporting as much as they’re educational. Team Punks promises “page after page of handsome jock muscle”, while On Our Backs, a periodical from 1985, offers “entertainment for the adventurous lesbian”.

With contributors ranging from Julie Burchill to Bruce LaBruce, Annie Sprinkle and Eve Libertine, the sheer width and breadth of punk is lovingly recalled. “The 60s was the first wave of sexual liberation, and the 70s was mine!”, writes the musican Honey Bane, who formed the Fatal Microbes in 1978. Showboat is crammed full of anecdotes and descriptions of a bygone London, of gigs and costumes and experimentation. A poster for Adam and the Ants, performing at the Royal College of Art offers its guests a “masturbation unit”, reaching out from the past and urging us to come along “as we take an exciting excursion into the bizarre world of gas masks, wellingtons, aprons, capes, mackintoshes and enemas.” Will Self puts the aesthetic of the time into a wonderful context: “Our clothing was leather and rubber and plastic: simulations and iterations of the skin we wanted flayed from us.”

More than anything, however, it’s the move away from mainstream culture and a desire to explore sex free of censorship which separates this from other works of its kind. The title itself, as Mott writes, “conjures the image of a self-contained theatre of flamboyant exhibitionists, moving along the river of time; an appropriate image, considering the way in which punk facilitated an approach to sex and sexuality which was brash, outlandish, and theatrical.” The fact also that so much can be included here is testament to the quietly tentacle-like reach of the movement in an artistic sense – from the “queer cross-dressing playfulness” of Lou Reed and Divine to films like Cabaret and Rocky Horror. Archive material is placed thoughtfully alongside modern reflections, the tone is both frolicky and fun; it’s a glossy that manages to maintain punk’s deeply sexual spirit while providing fresh insight through its contributors’ personal memoirs. 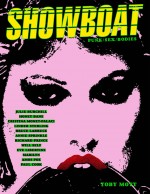 Showboat is published by Dashwood Books and is available from September 14. For more information visit www.dashwoodbooks.com/pages/books/16400/the-mott-collection-toby-mott/showboat or see The Mott Collection online at www.facebook.com/themottcollection.