February 18, 2016March 22, 2021 Editor 9166 Views 0 Comments
Utterly gruesome and horribly perverted, Nina Forever is our favourite film of the year so far. The tag line is no joke, this really is a fucked up fairy tale. Holly (Abigail Hardingham) begins to fall in love with the dark and brooding Rob (Cian Barry). Rob has a reason to have a touch of the emo about him; his girlfriend (Fiona O'Shaughnessy) recently died in a traffic accident. After attempting to commit suicide, Rob begins to piece his life back together, with Holly in the picture. But some girlfriends just don't see death as a reason to break up...

Before we go any further, let’s get one thing straight: this isn’t an original idea. It’s been done a few times. Even Hollywood has managed to re-package the idea of reanimating dead-exes for main-stream audiences, like when a recently decreased Eva Longoria harassed Lake Bell for an hour and a half in Over Her Dead Body (don’t bother). And who can forget Death Becomes Her? But it’s never been done as well as this. 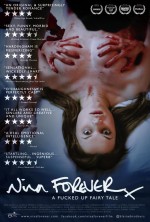 However, while the film is riddled with black humour, it doesn’t feel like it’s all that funny. It’s actually pretty serious. The performances are so straight you could use them to plot graphs. While the situation has the potential to be hilarious, many of the opportunities for witty one-liners have been passed up on. But maybe that’s what stops this from being Over Her Dead Body.

Nina Forever is on VOD and playing at the Ritzy Cinema in Brixton – 18th February at 22:30. Trailer below.

Breaking up is even harder to do in Twitter/Facebook-Land