Every generation is accused of believing that it invented sex. In the wake of the Olympic summer, however, you couldn’t catch a tube without catching the eye of the blushing person opposite, precariously balancing Fifty Shades of Grey upon clenched knees. This generation’s late teens and twentysomethings might be forgiven for thinking their own, Jane Austen-style ‘coming out’ ball far racier than anything which had come before.

These poems are as rich and diverse as you’d expect to find in a collection spanning a whole gamut of sexual experience: from brief encounters to longing glances, heydays and broken hearts. There is startling, terrible intimacy in Joy Donnell’s The Missing, which takes a piece of misplaced clothing and sees its speaker imagining it, nestling safe in the hands of an old lover:

its entirety enveloping his long fingers
and maybe while contemplating
its biography and the origin of the world
he closes his eyes
Inhales.

Similarly, in Donnell’s Trickster, the focus on another’s body is as a ‘border town too often mysterious,’ which ‘will surely riot, tonight’. John Canfield’s heady Elixir Amore advises the exact science behind a love potion: ‘drink every drop. Repeat until you’re numb.’ Ruth Wiggins paints a fantastically funny advice column to the young woman in Seduction, where

Half the problem is the company you keep.
Those girls, those magazines.
The advice they give is all very well,
if you want nothing but the company of geese.

The poem is clear in its intention to banish the ‘cleaner’ sides of sex: ‘Always resist the urge to scrub,’ she writes, ‘there are other uses for a bar of soap. Take care to smell just like the girl you are.’

O’Brien’s Magician’s Assistant – the most lucid, imaginative work in his collection – describes the conjuring effect of an affair with lyrical precision:

Legs. Released by the entrance song
They spread like an accordion,
Collapse

These were some of my favourites, though there is such scope in these works, and so much addressed. Throughout the anthologies, Wright’s gentle drawings are a welcome addition: loopy and understated, like hearts and arrows peppering school planners. Often they serve as a welcome distraction from the weight of emotion conveyed: these poems are often brief, vivid snapshots of sex and love, refusing to pigeonhole erotica as one thing or another. A pleasant cacophony of voices come together to describe the messy complications when any two people slip between the sheets. Liane Strauss’ A&E draws a lovely comparison between driving towards an inevitable crash, and the ‘sting’ of sexual release:

What a thrill to be adored
And pull you from the mangled, shattered Ford.

She leads the reader along ‘those hairpin curves on the Amalfi drive,’ as we are reminded that despite the horrors of separation, ‘this is what it is to be alive.’

You sighed and moaned and now you bleed and writhe.
This is love. This is love’s other side. 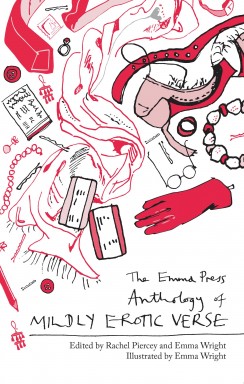 To purchase any of these collections or for more information about The Emma Press, see here

Time for a gender equality coalition?

The Radiance of Banality – Part One