Stratford is a strange, dead place after dark. The roads are straight and empty, lined with fancy new tower blocks in all directions, with only the occasional window lit. It’s hard to imagine anything living, let alone creating art in this cold and impersonal landscape. Which in some ways makes it the perfect setting for Mark Storor’s new play, The Barometer of My Heart, a disturbing and raw exploration of masculinity, potency and its constant companion, impotency. Erectile dysfunction is a common condition that is often kept hidden and undiscussed, behind closed doors and hardened exteriors; Storor’s play aims to bring this male experience from the shadows into the light.

The devised piece, brought together by a large company of performers and artists, takes place in the Sir Ludwig Guttmann Health and Wellbeing Centre, which was the health and dope-testing centre for athletes during the Olympics; tonight the ushers are dressed in black, anatomical drawings of hearts pinned to red armbands like insignia. The audience, the only people on the street, are split into groups, and we stand hushed in front of a closed garage door as though before velvet stage curtains. An usher presses a button and the door rushes upwards with a sharp rattle. The first surprise of the evening.

Much of the first half of the production plays on this element of the unexpected. It’s as much performance art as theatre, and round every corner, behind every door is a strange and disturbing new spectacle. The lime green clinic floors and walls provide a clinical backdrop to scenes of raw, ritualistic behaviour: a couple balance precariously on top of piled mattresses, gripping each other as they are drenched again and again by buckets of cold water; a man jumps on a trampoline, stretching for something beyond his reach; another lies on a leather gurney, contorting himself into impossible shapes, trying to take his socks off with his teeth. We are led from one set piece to another, from the gloomy basement carpark, through the brightly lit lobby and past consulting rooms and canteen. 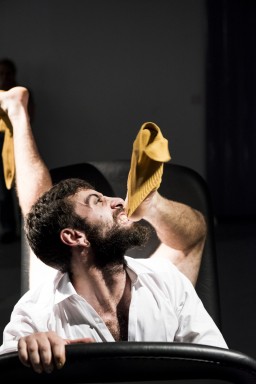 It’s a well-chosen space, reminiscent of the hospitals where Storor sat in on sixty-four erectile dysfunction consultations during his research. Despite the play’s roots in so much talking, the cast of eight men and one women are mute throughout; their only sounds are grunts, moans and pants of exertion and exhaustion, occasionally a breathless sob that turns out to be a ragged laugh. These are the sounds of sex and despair, backed by eerie synth music, the occasional mournful trumpet and piped shrieks. With no narrative to follow, the audience is left to interpret each set piece alone, and visual metaphors abound: a tiny bed filled with straw is hidden in a locker; tattered empty suits hang limply in a corridor; a dead canary lies on a table, a reference to erectile dysfunction as the ‘canary in the mineshaft’, as an early sign of cardiovascular disease. These are the obvious symbols, almost hackneyed in their references to stale sex lives and failed masculinity; but they are not centre stage, and to the cast’s credit, they mainly stay away from crude re-enactments of failed sex.

Much of the play’s power lies in the combination of performer’s proximity and the visceral nature of the scenes; mere feet away, a man stuffs cake down his trousers with brutal force, and you can see the thick crumbs and jam pressed into his skin. An old man licks mud off porcelain figurines with a wet, trembling tongue. Often the audience holds back tentatively, someone will shiver or let out a nervous sigh. These actions are filled with a whole range of emotions that you might expect: anger, pain, loneliness, disgust. The man with cake in his pants stumbles off blindly, pathetically, rather than let another man help him clean himself.

But there is also tenderness in the piece, gentle moments that bring relief; the cast touch each other softly, and there is much gentle washing of crud from each other’s skin. A welcome reminder that sex is not the only form of intimacy. One of the most powerful scenes in the piece involves two young, bearded men carefully cutting an old man from a full body wrap of cling film – he is trussed up like a raw chicken, and they work gently, with knives, peeling away the vegetables and plastic to reveal old naked skin cruelly bound in string. They take their time – nothing in this production is rushed – and the audience is transfixed for every tiny knife flick. 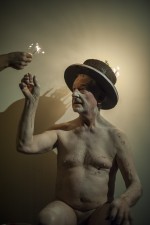 The second half takes place in one long, windowless room that seems to have no place in a health clinic – and it’s within these bare walls and concrete pillars that we lose our way. The set pieces are strung together now, but as the pace speeds up the play actually feels slower. What was at first strange but moving becomes alienating and overplayed; here is the quasi-sex scene and the puppet baby, and also men dressed in cardboard boxes shuffling around a cardboard niche. There is a redemptive almost-ending that rings brash and false in the context of more subtle scenes. It is all no less engaging, but it lacks the impact of the first half.

Storor doesn’t want the play to be a ‘glorified health campaign’, wanting it instead to get at the real emotional experiences of men affected by erectile dysfunction, and though I still have the words of a piped health announcement ringing in my ears when I leave (“tell a man that if he doesn’t stop smoking…”), in this aim he’s succeeded. It’s a powerful and imaginative production, part Punchdrunk, part performance art, that leaves its audience shaken and moved, and does justice to the range of confusing emotions that accompany this taboo topic.

A Lesson In Sexting