It’s official: Sade is part of the canon. Thanks to a blistering new translation by Thomas Wynn and Will McMorran, the 120 Days of Sodom now sits merrily alongside War and Peace and Little Women in a restrained, matte black cover. A familiar little bird in an orange bubble is posed directly under Man Ray’s Monument à D. A. F. de Sade, a close-up of pert buttocks framed by an inverted cross. Fifty years ago, anyone who published Sade faced prosecution. Now, ‘the most impure tale ever written’ is a Penguin Classic.

And about time too. Notwithstanding the years of research that a good translation demands, this new version of the 120 Days is well overdue. The last attempt to bring Sade’s most obscene work to English eyes emerged in 1954, and has been suppressed and barely edited since. The French redeemed the Marquis a little more swiftly. Sade was introduced into the Bibliothèque de la Pléaide, France’s leather-bound reference editions of canonical texts, in 1990. As ever, where the dirty stuff is concerned, we Anglo-Saxons are always playing catch-up.

As soon as you dive in to their translation, you can see why. Wynn and McMorran’s introduction is as scholarly as it is accessible, giving us a snappy history of the 120 Days and its genesis, Sade’s life and legacy, and two centuries of his readership’s struggle between moral outrage, artistic appreciation and critical objectivity. Not content with making us think about what we’re going to read, they also encourage us to think about how we’re going to read. Before we enter the gothic cloaca that is the Château de Silling, the libertines’ secluded castle, our translators make us consider the visceral, affective side of Sadian violence, what it means for the 120 Days to become part of the canon, and what our responses to Sade can tell us about ourselves.

The translation itself is brazen and, Wynn and McMorran claim, as authentic to the text as possible. McMorran tells us they had a duty ‘to be just as rude, crude, and revolting as Sade.’ Depicting the brash obscenity of libertines masturbating over crucifixes covered in shit or burning clitorises off with candles is no easy task, but these two dons have done a sterling job. Lord knows, it’s hard to imagine a translation more obscene. If they have spent as long debating the relative linguistic merits of ‘fapping’, ‘frigging’ and ‘jerking off’ as they say, we’re in safe (if perhaps slightly sticky) hands.

By bringing The 120 Days into the canon, Penguin has given Sade a new lease of life. We Anglophones can finally get up close and personal with one of literature’s greatest anti-heroes. And, thanks to our two scholarly guides, a host of new readers don’t just get to confront Sade. Whether we’re horrified or aroused by what lies between its covers, this new, accessible 120 Days also forces us to confront ourselves… 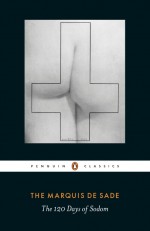 Illustration: The Inevitability of Punishment by Lynn Paula Russell from The Illustrated Book of Corporal Punishment