Former president Clinton, a masturbating nun and the Boston strangler walk into a rehabilitation centre. While this may sound like the start of a vaguely offensive joke, these individuals are among the case studies featured in the ever-growing sex addiction literature. Once referred to as ‘the next tsunami of mental health’, the first thing that becomes apparent from reading Reay, Attwood and Gooder’s critical history of the ‘disease’ is that nobody quite knows what it is. Tracing the condition from its nineteenth century origins to its popular conceptualisation in the 1980s, the authors’ central argument is it’s a diagnosis with little specificity or explanatory force. Instead they convincingly show that the vague malady has developed in line with contemporaneous conservative sexual standards. 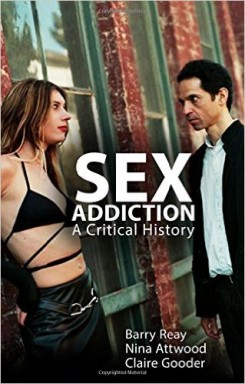 Sex Addiction: A Critical History opens with a social and medical history of sexual disorders which lays the foundation for the rest of the book. The authors identify a moralist agenda evident from the modern disorder’s early precursors, satyriasis and nymphomania, which applied differentially between genders. For men this meant partaking in criminal sexual behaviours whilst for women a high sex drive or adultery spelled ethical corruption. It continued through the early 20th century; diagnoses of disorders were determined by traits such as total orgasms per week (apparently upwards of seven indicated hypersexuality). Then, Kinsey’s research and the sexual revolution inspired some much needed revisions if not further diagnostic clarity. From the 80s onward it remains present, in the form of puritanical God-fearing 12-step rehabilitation programmes and a disproportionate identification among gay communities (as per the 1983 criterion, homosexuality was part of a symptomatic continuum culminating in child molestation). In these opening sections the authors provide an absorbing and in-depth history of the cultural epidemic we call sex addiction, that’s both authoritative and accessible. Covering more than a century of discourse, they never risk bogging down lay-readers in academic jargon.

Despite the unclear past the authors try to salvage a working definition for Chapter 3, which attempts to examine the addiction model at its current face value. This includes detailed discussions on the role of the internet and social media in enabling and publicising the disorder. It is not only social varieties of media that contributed to how ‘sex addiction’ is perceived by the public. More traditional forms have also heavily contributed towards shaping unawareness via uncritical representations of victimhood across a wide range of films and TV. Here the authors do an excellent job of rounding up high and low culture alike (including Choke and Shame along with less respectable titles such as My Teen Daughter is Addicted To Sex) to document the spread of misinformation across platforms. Unsurprisingly, South Park provides one of the few exceptions, with a highly sceptical episode about Tiger Woods using the term ‘addict’ to shield himself from criticism, and the boys diagnosed with the disorder.

Accompanying these works of fiction are inspiring celebrity and non-celebrity recovery stories. Common across a lot of these tales is an undercurrent of depression and excess in other areas, along with alleged addicts refusing to label themselves, save for Russell Brand (who also admits his precursor for help was concern for his career rather than any suffering). Having contextualised people’s belief in the disease, the authors then deliver the real meat of the book: an exploration of diagnostic tools, the ongoing DSM (Diagnostic and Statistical Manual of Mental Disorders) debate and the failure to create adequate treatments. The recurring finding is that sexual behaviour simply cannot be adequately isolated as a factor in either the identification of management of sex addiction.

As with other recent books about the medicalisation of everyday life, Sex Addiction: A Critical History is an equally social and medical call to arms for the rejection of illegitimate psycho-mythology. Yet while it succeeds in many areas it was disheartening to see the neurological literature summarised and rejected within a page and a half during the book’s conclusion. Yes there are reasons to think of modern screening methods as something of a new phrenology. But there are also established findings, such as sex addicts showing heightened activation in the mesolimbic (i.e. reward) pathway of the brain. This includes areas that are implicated in judgment, decision making and behavioural control among other traits. Changes to how the brain functions, following continuous exposure to specific substances or behaviours, provide the backbone of the disease model. Whether this reflects the hi-jacking of people’s neurological circuits, or is merely a sign of structural plasticity (i.e. the brain’s potential to change itself with behavioural or environmental stimulus) or an exaggerated form of learned preferences is still a contentious issue, and one that the authors need to weigh in on. Dismissing this on account of some studies involving non-human animals and a generalisation about dodgy genetics is both misleading and inaccurate, as many do not.

While the book has an intellectual head, it feels as if it lacks an empathetic heart. Regardless of its legitimacy, so-called sex addiction still ruins lives (admittedly less than we’d think) and a look at other more reliable means to deal with the psychological stress is notable in its absence. While readers may close the book stimulated and better informed, telling sufferers their addiction isn’t real doesn’t necessarily help them. Instead, as per the three people seeking rehab in my opener, they will still want to feel better. Ultimately it is this, rather than misinformation alone, that allows medical malpractice to continue.

David S. Smith is a doctor of psychology. He lectures at BPP University, School of Health, London

All That Tease: Burlesque at Erotica

Postcards From The Edge 10