In author and illustrator Adrian Teal’s own words, ‘The Gin Lane Gazette is an exuberant, bawdy, journalistic compendium of highlights from a fictional 18th-century newspaper dealing with entirely true stories from this age of scandal and bad behaviour: a kind of Georgian tabloid, if you like.’  Courtesans, politicians, novelists and, of course, royalty are mercilessly singled out for a Daily Mail, sidebar-of-shame type of drubbing.

I could be forgiven for thinking at first that the stories were a superb and inventive flight of fancy by the erudite and talented Mr. Teal.

Perish such a thought. All of these outrageous stories are true, or were reported as such around the time they occurred, and given the recklessness of the scandal sheets then, we have little reason to disbelieve them. Which goes a long way to show that fiction is often a loser in the strangeness stakes. There is, of course, the odd foray into hyperbolically ribald verse, such as that of the Prince of Wales’s favourite filthy balladeer, Capt. Charles Morris. Here’s one of his verses about the prodigious size of the newly-arrived Algerian ambassador’s cock, submitted for inspection to the Ladies of the Town:

The Dames of Intrigue formed their c––ts in a league
To take him in turn like good folk, Sirs,
The young Miffes plan was to catch as catch can
And all were refolved on a ftroke, Sirs!

This is the sort of delightful, brilliantly illustrated tome it would be folly to try to read at a single, or even two, sittings. A book-marker might come in handy: no one would want to overlook any of these anecdotal pearls from a period where occasionally entire coaches were swallowed by potholes, cabinet members fought duels and Britain appeared to be permanently at war with someone, usually the French. Oh, and there was abfolutely no real cure for the Pox.

Mark this one down for your beloved’s Xmas present. It’s a muft. 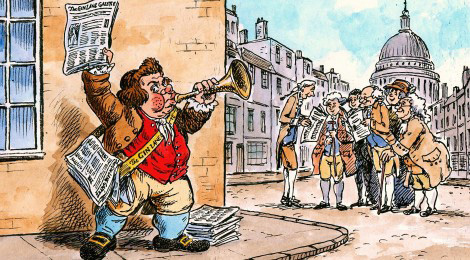