March 10, 2016February 18, 2021 Editor 6843 Views 1 Comment
What can I say, Gellius, about why those rosy lips of yours / Whiten more than whiter snow / When you leave your house at dawn and wake from / Perfect sleep in a summer day’s eighth hour? / Something’s up. Is the rumour true that / You suck a man’s bulging balls? / You bet it is. The ruptured testicles of poor Victor / Proclaim it – and your lips etched in drained semen. (LXXX)

The poet Gaius Valerius Catullus wrote filth. Other stuff too, but this is Erotic Review, after all, and we’re interested in the smut. Catullus was born before the Romans came to Britain, before the advent of Christianity, before King Alfred burnt the cakes and the battle of Hastings. He was becoming more widely read as Cromwell lopped off Charles I’s head, and he experienced a revival during the Renaissance – already 1,500 years after his death. He’s been around for a while, then, but the problem is he wrote in Latin – Latin that some of our more plutocratic readers will have had to translate at school, minus all the saucy bits, and consequently now loathe. Catullus is not current or sexy. And he not only wrote – he wrote poems, which is a bit naff. Plus, he’s dead.

Thankfully, Daisy Dunn is here to save the day. She adores this ancient verse-maker, and now, since reading her first books – published concurrently – so do I. Catullus is far more than a scholarly turf for a scant handful of academics in shadowy libraries, as the tidy little hatchet job above suggests. I don’t know what the hapless Gellius had done to our man, but hell’s bells it must’ve been bad.

Most of what we know about Catullus’ life, Dunn explains, comes from his libellus, or little book, a collection that “resembles a series of jumbled diary entries” comprising over 100 poems – referred to only by number, and not in chronological order. Dunn has translated these as an accompaniment to the interactive biography-cum-history that is Catullus’ Bedspread: The Life of Rome’s Most Erotic Poet. It’s worth diving into both at the same time, as Dunn no doubt intended – the poems inform the narrative, and vice versa. “I felt that the bones of some of Catullus’ more striking constructions deserved airing,” she writes, “in order that the spirit of the Latin can live on in the English.” Dunn explains the difficulties of finding an English equivalent for the sound of Latin verse, which is understandable, but her upbeat, modern lilt lends itself well to the work:

Veranius, had I three hundred thousand

Friends, you would still be number one. (IX)

Whereas much of the classical poetry that came before him had praised the great deeds of great men, transforming the 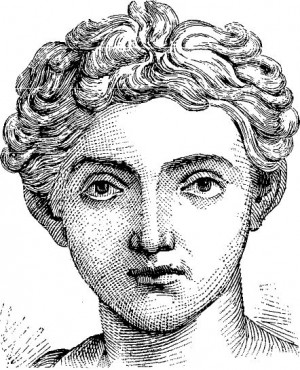 everyday into the fantastical, Catullus turned the gaze inward. He wrote about love, sex, infatuation, jealousy. There are no heroics in the libellus, no white-knuckle rides, six-headed monsters or ravenous whirlpools. The poems are personal, reflective, “showing that the people of his world are not always so very different to us”. This is proved through the absolute glut, the sheer volume, of poems about Lesbia, the pseudonym used by Catullus for Claudia Metelli Celeris, an up-for-it scion of the aristocratic Pulchri family and also, unfortunately, married. “I hate and I love, why do I do so, perhaps you ask?” he asks in LXXXV, “I do not know, but I feel it, and I am crucified.” The 25 poems charting their relationship span lust and love, sadness, jealousy and anger. Dunn both brings this to light through translation and examines the linguistic tenderness of Catullus’ hymns to Lesbia, which, initially at least, “contain no trace of crudeness, or its accompanying bravado”. The verses reveal a gradual change from a forlorn and lovesick poet – “You dangle before me, my love and life, the prospect/That this love of ours will be cherished and last forever” (CIX) – to a biting bitterness:

The dolt finds considerable happiness in this

She is angry. This is how it is, she burns, and she talks. (LXXXIII)

Once he came to realise their trysts were not exclusive, Catullus attacks Lesbia, “seeking vengeance through literary release”. He “simply was not prepared to place limits on his own freedom of speech”: the Roman equivalent of a modern-day troll, blazing onto a keyboard, showering expletives and hard-hitting emojis:

Don’t be bewildered, Rufus, as to why no woman

is willing to lay her delicate thighs beneath you

There is a cruel rumour that does you discredit, according

to which you house a wild goat in your armpits

So either kill the harsh assault on our noses

or stop wondering why they flee. (LXIX)

We can see that such outbursts weren’t limited to his love life. Insults – “dog face”, for example, so brilliantly simple – litter the poems:

Open cunt of a peeing mule on heat…

If any girl touches him, should we not think her capable

Of licking the arsehole of a diseased executioner?” (XCVII)

The bedspread of Dunn’s title is taken from the epyllion (little epic) poem XCV, which describes Theseus’ abandonment of Ariadne, a scene depicted on a blanket at a wedding celebration, and doomed to be frozen in time forever. Catullus, Dunn suggests, noticed such parallels in his own life – the pain of rejection and the bile this in turn spawned towards others. “Catullus was a conflicted man,” she writes. “At any one time he could hate and love, curse and censure, consider himself rich but call himself poor. While lending themselves perfectly to poetry, such extremes of emotion at times made his life unbearable.”

In addition to these raucous invectives, Dunn skilfully positions the poet within the turbulent political sphere of the late Republic, before the emperors came to rule. He was “surrounded by towering politicians” – men like Pompey, Cicero and Julius Caesar. A particularly moving section describes Catullus’ spiralling grief following his brother’s death. The narrative is fresh, pacy, well-structured and incredibly well-researched; Dunn’s exploration is as directly personal as the poet’s own works, literary proof that “while Catullus is ripe for the bedside, he is not yet ready to be put to bed.”

The sex-ed war: Pearl clutchers are putting our children in danger