October 18, 2012October 18, 2012 Editorial Assistant 210 Views
To kill a king? Henry IX, the monarch that never was, is reincarnated in a new exhibition

In 1611 the young Prince Henry was a healthy child and a promising heir to the throne: adventurous, charming, good-looking, cultured and noble.  Henry, read lines of verse on the wall, thy best hope, and the world’s delight/ Obtain’d to make thy eight Henries nine.

Today, the National Portrait Gallery opens The Lost Prince, its newest exhibition, to mark the 400th anniversary of his death and to assess an oft-forgotten legacy. Curator Catharine MacLeod says she was attracted to restoring the image of this hitherto invisible figure in British history, a man who would have succeeded his father, James I of England and VI of Scotland, and whose death prompted the later coronation of younger brother Charles (I).  The story is fascinating in itself: were Henry to have lived, the course and shape of the monarchy may well have been altered forever, with no regicide or eleven-year Protectorate and no Cromwellian rule. It’s interesting to consider the sort of king he might have made, or who he might have fathered – there was gossip of an affair with the Countess of Somerset, the minx – although perhaps not, as his biographer Sir Francis Bacon rather cryptically wrote, “as for women, there is a strange silence…” 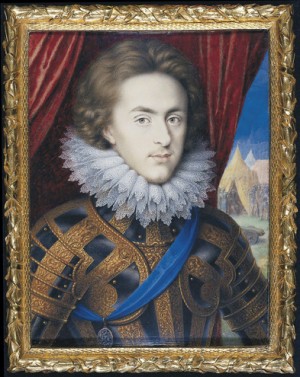 The exhibition tells Henry’s short-lived story through the great myriad paintings, miniatures, drawings, documents, books and battle armour both created for and about the young prince, as well as that amassed through his own enthusiasm for collecting great works of art. Something of a Renaissance tart, he was painted, admired, constantly at centre-stage. Portraits by Robert Peake, Isaac Oliver and Hans Holbein convey his youth and vivacity, the hope invested in him. Inigo Jones’s costume designs for the 1610-11 Christmas celebrations, in which Henry played Oberon in The Faery Prince, show the great public image of the royal heir. Also featured is his royal armour, given as a gift, one suit of which includes the linking of the Scottish thistle, English rose and French fleur de lys.

Appearances can deceive. These assembled objects are testament to the fact that no matter how much wealth, privilege and splendour surrounds, death can always make an untimely intervention. According to MacLeod, at Henry’s funeral procession there were in excess of five hundred extra mourners than at Elizabeth I’s. This was unprecedented for someone who was not, at that time, a monarch himself.  The final wing holds examples of the dedicatory prose and poetry produced in the wake of the Prince’s death. These are of particular interest as they seem to have altered certain traditions of the print culture: a large majority of pages are painted black with white lettering, allowing for a new kind of visual metaphor to accompany the content of the volumes.

The early demise of Prince Henry precipitated a grief which by modern standards can only be compared to that following the death of Princess Diana. Out of this, however, springs an eclectic collection, poignantly ending with Henry’s now crumbling wooden funeral effigy. Our Rising Sun is set ere scarce he had shone, and…all our glory lies buried, writes Richard Sackville, 3rd Earl of Dorset. Not quite buried, though – head to the NPG before 13th January to uncover this previously hidden treasure.

An Interview with Jodi Ellen Malpas

POSTCARDS FROM THE EDGE NO.9