November 28, 2019June 8, 2020 Editor 18763 Views 0 Comments
We humans have always licked each other's genitals. It's our attitude about oral sex which has changed over the centuries.

Humans really have been licking each other forever. One of the first graphic examples of oral sex, which you can find (through persistence) depicted on papyrus inside the British Museum in London, is the myth of Egyptian gods Osiris and Isis, incestuous siblings though they were. After the politically successful Osiris was hacked and scattered by his jealous brother, distraught Isis reassembled his parts minus his missing penis (which had been thrown into the Nile and eaten by the oxyrhynchus fish, which is why this fish was forbidden food in ancient Egypt.). She made a new cock for him out of clay. (Which begs the question, if you could reconstruct your lover’s penis what would that look like? Did she make it bigger? I might add a dorsal fin-like G-spot stimulator.) Then, for some unexplained reason, Isis ‘blew’ his penis in order to bring Osiris back to life. Why, I ask, was life restored through the penis? The mouth seems more logical. Makes me suspicious that cock blowing was something the myth-makers thought up as they sat around scratching their balls wondering how to incorporate fellatio into the aspirational lives of 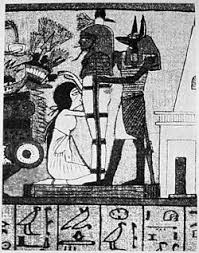 Sadly, when Rome collapsed, and the early Christian church began coming up with their own code of conduct, oral sex was deemed “the worst evil”, punishable by seven years of penance and fasting. Murder (murder!) only got you one year. This church-imposed distaste for tasting of the flesh lasted for what can only be considered a god-awful amount of time. By the 19th Century, however, the practice began emerging from the underground of subversive activities and our sexual lexicon saw the advent of ‘hornsmoking’ and ‘pearl diving’ among the many terms to emerge describing oral sex. (Visit here to engage with the astounding interactive timeline of intercourse and oral sex descriptors through the millennia.)

But is oral sex a proclivity only of humans? While a lot of animals lick their own genitals (wouldn’t you if you could?) there are few that lick the genitals of another. One exception is the female short-nosed fruit bat, observed licking the male penis during intercourse. Scientists have deduced that lickers increase the time of copulation compared to non-lickers. Meaning she likes it? Of course she likes it. Keep going, darling. Here’s the video footage.

A few male bears in captivity have been seen engaging in fellatio from a young age, though this hasn’t been observed in the wild. Researchers speculate it’s because the bears became bored locked up in a cage. I speculate it’s because no one ever told them it was bad. But really, do we go down on each other because we’re bored? It does mix things up.  But more importantly, our relative safety within organized society, and the fact that most of us aren’t constantly on guard for predators or foraging for enough food to survive, has resulted in prolonged and varied lovemaking not available to other species . And surely, once it got around the village that licking a woman’s clit (or sucking his dick) made everyone really, really happy (for awhile at least), that, in a sense, sealed the deal.

Some of my favorite books on oral sex are by the adorable Ian Kerner, PhD, who has written, She Comes First, Passionista, and He Comes Next. After I read Passionista I experienced a verifiable uptick in the apparent pleasure a man experienced when his dick was in congress with my mouth. My unexpected discovery was that the more he was turned on the more I got turned on. I have no doubt that’s what most men feel as well when they are between our legs.

At our worst, humans are nothing but glorified animals, motivated by our single minded will to survive, procreate, and outdo the competition. But at our best, we are constantly tweaking the experience of existence and the pleasure therein. We create glorious food, soul searing art and literature, and seek new vistas of bodily experience. The brain’s connection to our mouths is what produces language and communication. Brain to mouth to genitals is an extension of that very human act of intimacy that may, on occasion, be replicated in the wild by other mammals. But to me it’s a uniquely human act of worship. We are prostrate, focused and, perhaps, allowing the spirit of Eros to possess us. You may never feel as though oral sex is an opportunity for transcendence, as either the giver or receiver. But then, you may be missing out.

Tom’s Dicks and Harry’s, too

The Death of Obscenity

POSTCARDS FROM THE EDGE 17