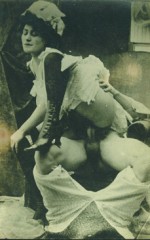 And looking out, like butterflies in glass
we want their eyes sad as we guess they were
when fucked in monochrome, pinned to the past
by more than frills, fabulous hats and hair

so sleek we might mistake it for our own
and, unaware the skin around it shrinks,
imagine it, in unmarked coffins, grown
thick in holy waves; or so we think.
We aren’t prepared for this;
this buoyancy, this sense of play
that beckons more than any arse or tits,
surprising as the peep-show at Pompeii
where men could turn a key, lift up a hinge;
see secrets – close it – gone, as swift as wings.

So Much Will Waste

Flat on my back in a Methodist chapel
I watch a plastic bag fill up with blood.
It’s mine, and next to me is you, and yours
it’s filling half as fast and twice as red.
I hate to state the obvious, but baby,
we’re already lying down, and when it’s done
they’ll toss them both together in a van;
we’ll never see those pints of us again,
and they’re no longer ours – other men
will share you, other women me, the secrets
of our hearts will whisper in the walls
of strangers’ ears. So by comparison,
we’ve known each other years in this position,
since we know our bodies, young and strong,
were vetted good to go. It’s all the same –
our tissues sank, we both filled in the forms,
and we could brush in arteries or veins
as close as passengers on rush-hour trains.
We’ll breathe and bruise, it hasn’t killed us yet;
the window closing when the platelets clot
is thin as plasters, fragile as the Tuc they hand you
in the blush of standing up. But this is not the closest
we could ever get to knowing how it feels to swim
across a body like a foreign cell: forget the spinning
ceiling, then, let steel mosquitoes dive towards
the wrists of noble citizens. They’ll do no harm
that we can’t heal in one another’s arms.